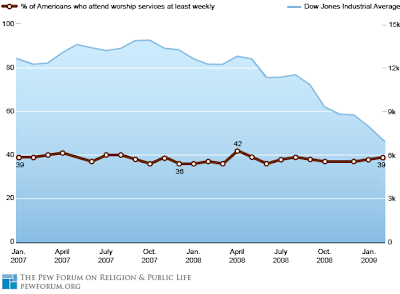 I just had to laugh at this graph, because I know all to well the joy some believers have that when finally the economy goes to hell, then perhaps the ungrateful will turn to the Lord. "No Atheists in an economic foxhole" and so on. But it's apparently not happening.
(In fact, if you look closely, the latter half of the church attendance graph is more below the 40 line than the first half.)
Lagt inn av Unknown klokken Sunday, March 22, 2009 6 comments: