Number of atheists around the world is rising

"According to the latest global poll released by RedC Opinion Poll, part of WIN-Gallup International, a world-wide network of leading opinion pollsters, the number of self-declared atheists in the world has risen by 9% since the measure was last taken in 2005.

The massive poll, conducted in 57 countries (not, apparently, including Britain) among 51,000 people asked a single question "Irrespective of whether you attend a place of worship or not, would you say you are a religious person, not a religious person or a convinced atheist?"

One of the most dramatic reductions in the proportion of the population considering themselves religious occurred in Ireland: from 69% in 2005 to 47% in 2012, placing Ireland on the index of religious belief at position 43 out of 57 countries.

The poll also showed that the poorer people were, the more likely they were to be religious.

One anomaly that the pollsters have themselves questioned is in Turkey, where those who say they are religious is only 23% while those defining themselves as non-religious is 73% (self-defined atheists 2%)."

Here's a couple of charts from the report: 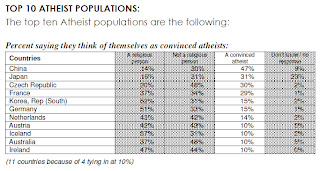 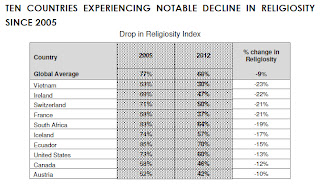 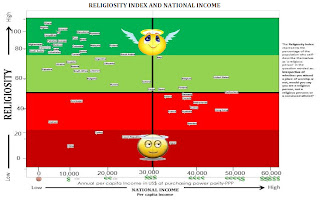 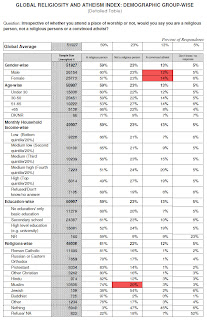 Notice on the last chart that women are slightly more atheist than men. This contradicts most other polls, but it's nevertheless a good thing. Also notice how relatively many Muslims are non-religious compared to, say, Catholics. A lot of Jews are non-religious, but that was to be expected.
Lagt inn av Unknown klokken Thursday, August 09, 2012