Less crime if you believe in Hell?

"Belief in hell keeps down criminal activity, but belief in heaven actually boosts it, according to a pair of researchers at the universities of Oregon and Kansas.

Azim Shariff and Mijke Rhemtulla scoured 30 years of international values-based surveys and found societies that put more stock in supernatural benevolence than supernatural punishment have higher national crime rates. The relationship is so significant, they found, that it is a stronger predictor of crime rates than are economic factors such as gross domestic product and income equality."

I understood immediately that there were issues with this research. Comparing crime statistics between countries, when crime is reported differently makes no sense at all. I may be prejudiced but I my first thought was that belief in Hell correlates with poor crime statistics. I might as well post the graph right away (which is picked up from Epiphenom which also has a critical article): 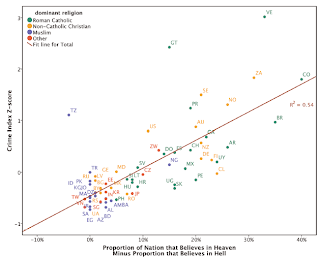 It's a bit hard to read with only two letters abbreviations but you can see that Norway (NO) and Sweden (SE) are ranking high here. Yes, I live in one of the most crime infested countries. I wish I lived in Egypt (EG) which you will see on the bottom.

"Interpol merely gathers and reports nonlethal crime statistics provided by member nations without standardizing or vetting it [19, 22]. For example, assaults are reported at a rate about 6 times higher in Australia and Sweden than in Canada and France, this level of disparity is suspect. Rates of theft are reported to be twice as high in Sweden as in France; are the former actually twice as larcenous as the French, or are the latter twice as unlikely to file a report, or is the reality somewhere in-between? Similarly suspicious discrepancies exist in International Crime Victims Survey results. Reported rates of rape are two to twenty times higher in the U.S. than in other 1st world nations [24,25], but this only means that American females report being raped at far higher rates, not that American males are more prone to committing sexual assaults. Nonlethal crimes are difficult to compare even between the relatively uniform 1st world countries, they only grow worse when comparing 2nd and 3rd world nations with greater disparities between the quality of crime reporting."

The only statistic you can reliably compare is homicide, but even there there are issues:

"In contrast, Jensen found that more homicide is more strongly linked to greater popular support for the reality of hell than for heaven [12] -- he suggests that “malevolent” forms of religion produce inferior results compared to “benevolent” -- Sharif and Rhemtulla do not cite Jensen or explain the disparity in their results with his. Sharif and Rhemtulla find that more homicide weakly correlates with more belief in God, Rees [5] as well as Jensen [12] found a positive relationship in a large sample of nations. In the more uniform prosperous democracies the only example with high levels of homicide, the U.S., has the highest levels of religiosity including belief in heaven and hell [6]. The advanced democracies with the least, and remarkably low, homicide are the most atheistic. (It would be interesting to analyze correlations between measures of religiosity and homicide in different economic categories of nations.) Potential reasons that deity worship and scripture contribute to lethal violence have been proffered [6-8,13-15].
How crime in general corresponds to differing levels and types of religiosity remains inherently uncertain, but the most atheistic democracies appear to suffer relatively modest nonlethal misdemeanors and felonies, and definitely enjoy very low lethal violence. All studies agree that the most reliably measured crime, homicide, tends to be higher in less atheistic countries. Studies are contradictory regarding how homicide correlates with differing belief beliefs in the afterlife, further analysis may clear this up."