The Amboy Times has a year old blogpost called "The List of Things That Offend Muslims". It is a post that keeps growing, as readers submit new stories about some complaint from some Muslim about some aspect of society the rest of us may take for granted. (I submitted the story about a grandmother who was refused service by Muslim staff when she tried to buy a book on bible stories for children.)
A lot of comments, both at Amboy times and at The Friendly Atheist say that it is unfair to use these loonies as examples of what Muslims in general do. I don't really think anyone does that(and most of us are quite happy to cheer at reasonable Muslims), but the fact remains: these complaints keep coming and they drag all Muslims with them down into the mud.
Of course, Christians have been complaining too, for 2000 years. Being persecuted is part of but their image. But complaints have weakened over time, though perhaps less so in USA.

It is all these complaints, whether they come from Muslims or anyone else(they are not alone), that made me think differently about Freedom of Religion. There should be a freedom to believe, express yourself and gather. But these outlandish demands must be curtailed. In the post "Freedom of religion has become a mockery and must be abolished" I mentioned that the beliefs, expressions and being able to gather is guaranteed even without Freedom of Religion: 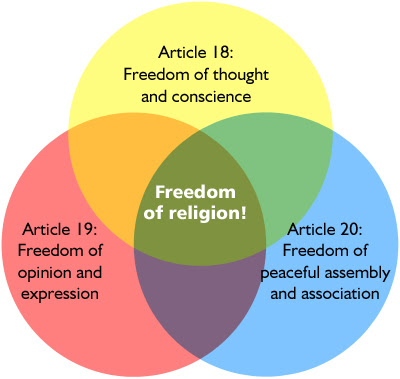 However, I could have done more than that. I know there are some reasonable demands that goes outside the strictly intellectual frame. I then checked out the "European Convention for the Protection of Human Rights and Fundamental Freedoms"

As you see, here are some limitations:

Article 9 – Freedom of thought, conscience and religion
1. Everyone has the right to freedom of thought, conscience and religion; this right includes freedom to change his religion or belief and freedom, either alone or in community with others and in public or private, to manifest his religion or belief, in worship, teaching, practice and observance.
2. Freedom to manifest one's religion or beliefs shall be subject only to such limitations as are prescribed by law and are necessary in a democratic society in the interests of public safety, for the protection of public order, health or morals, or for the protection of the rights and freedoms of others.

I think it is time that the devout community stop thinking of religious freedom as being able to do what they like in the name of their own religion. There are very real limitations, and they are here for very good reasons.
This is not just in the interest for Atheists to focus on. The example with the grandmother and the bible stories show as much. Not to mention that medical students disobeying hygiene rules because they are so much holier than the rest of us end up putting us all at risk.

The worst thing about many of these demands is that they're easy to see through as modern fundamentalism, and not rooted in a traditional interpretation of religion.

A note on Walkers Crisps and alcohol:
Before:

[The isolation of alcohol] as a relatively pure compound was first achieved by Muslim chemists who developed the art of distillation during the Abbasid caliphate, the most notable of whom were Jabir ibn Hayyan (Geber), Al-Kindi (Alkindus) and al-Razi (Rhazes). The writings attributed to Jabir ibn Hayyan (721-815) mention the flammable vapors of boiled wine. Al-Kindi (801-873) unambiguously described the distillation of wine.[2]

Furious Muslims have heavily criticised Walkers crisps after it emerged that certain varieties of the manufacturer's products contain trace elements of alcohol.

How the mighty have fallen. These Walkers whiners are not only a nuisance to modern secular society, they are a disgrace to their own heritage.

Thanks for the link. You make a good point that freedom of religion shouldn't override other freedoms.