"Children who are spanked or victims of other corporal punishment are more likely to have sexual problems as a teen or adult, according to new research presented today by Murray Straus, co-director of the Family Research Laboratory at the University of New Hampshire.

Straus analyzed the results of four studies and found that spanking and other corporal punishment by parents is associated with an increased probability of three sexual problems as a teen or adult:

* Verbally and physically coercing a dating partner to have sex.
* Risky sex such as premarital sex without a condom.
* Masochistic sex such as being aroused by being spanked when having sex.

“These results, together with the results of more than 100 other studies, suggest that spanking is one of the roots of relationship violence and mental health problems. Because there is 93 percent agreement between studies that investigated harmful side effects of spanking, and because over 90 percent of U.S. parents spank toddlers, the potential benefits for prevention of sexual and relationship violence is large,” Straus says."

And the reason why I post this here is that corporal punishment is favoured among religious conservatives.
The most grave aspect (after they grow up) is verbal and physical coercion. Can you say rape? It has to be said though, that calling sado-masochism a sexual problem is stretching it a bit far if it's consenting, and not of the extreme variety.(No, it's not my thing)

Now, a little bible reading will do:

Hebrews 12:6 For whom the Lord loveth he chasteneth, and scourgeth every son whom he receiveth.

I looked this up earlier, because at least in Norway, there has been discussions among theologians whether or not this just meant teaching your children to behave. To liberal Christians, this is no doubt a preferable interpretation, (and to society too I must admit).
But after looking it up at Scripturetext.com (hit the Lexicon tab) I think it is safe to say that this is not just about teaching: 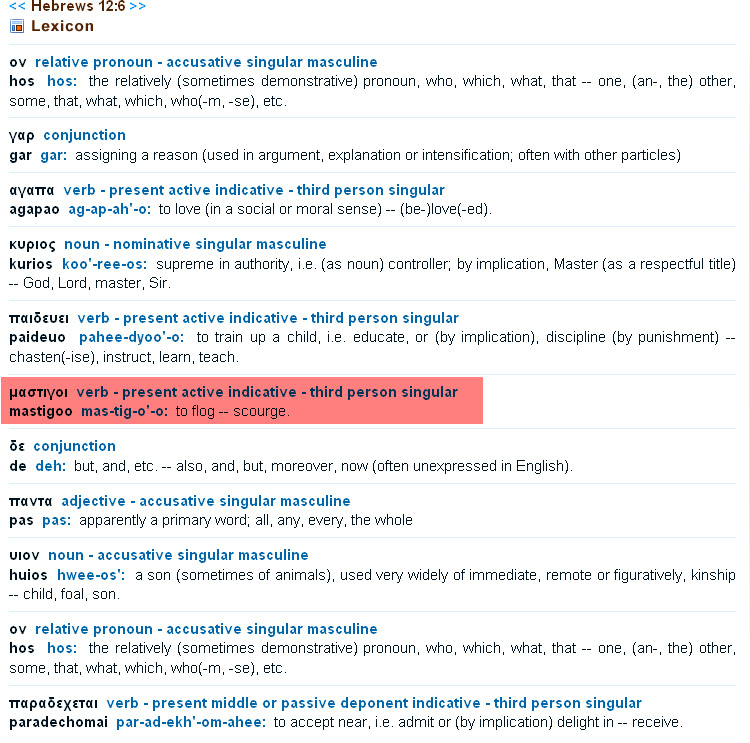 As you can see, the word mastigoo is used, meaning to flog, scourge. To put things into perspective, we can have a look at Matthew 20:19: "And shall deliver him to the Gentiles to mock, and to scourge, and to crucify him: and the third day he shall rise again.". And yes, it's the word mastigoo that is used.

You can also see the other places it has been used.

Still, there's another thing that complicates this. Hebrews 12:6 refers to Psalms 94:12: "Blessed is the man whom thou chastenest, O LORD, and teachest him out of thy law;"

"Chasteneth" can be physical, but notice that there's no mention of outright flogging. The reason is that the writer of Hebrews only had access to the Septuagint, the less than perfect Greek translation of the Old Testament. However, from what I can see, mastigoo does not appear in the Septuagint version of Psalms 94:12

Maybe the write of Hebrews was a sadist, but I'll leave it there, because I realize I'm on fairly deep water now. But I think it's safe to say that the verse in Hebrews has caused a lot of grief, and that it's not necessarily the correct reference to Psalms 94:12.
In any case, you don't flog your children like the Romans flogged Jesus.

Reaping the benefits of a good Christian upbringing: 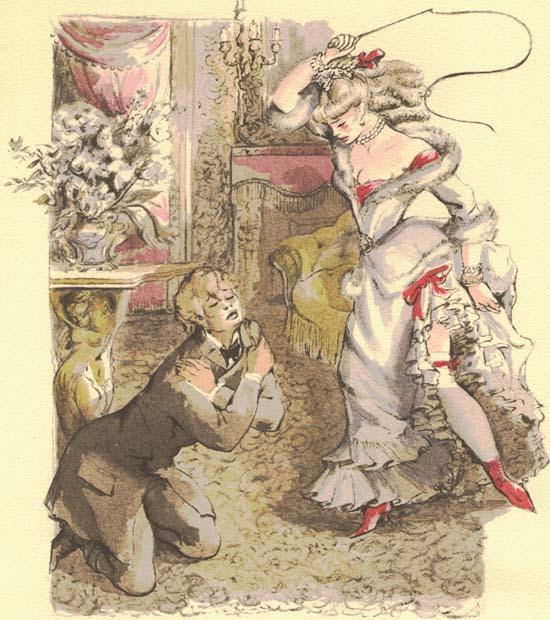